For a celebration at work, I brought these two cakes:

I’m afraid I like too much experimenting in the kitchen and trying new recipes, and the poor guys at work nearly always get something new to try. The first of the cakes is a German Mohnkuchen (a poppy seed cake), which recipe has been marked in the book Heimwehküche since I got it for the review. It was nice but filling….way too much. For me it had too much butter inside. It is fine when doing it for a large group of people, but even then try to do it thinner. I was the first and last time to make it.
The second cake is a twist on a home classic: rosca de yogurt. I will post the original recipe at some point. But in this one I tried to make it healthier by changing the refined sugar with muscovado sugar, but the result was not really satisfying. I will have to try to substitute it in another way.

Finally! We manage to succeed working with our waffle iron! We bought it some time ago but at the beginning we always have problems of the dough sticking to it. But finally we got to learn how to use it: it has to be very hot on both sides, then we add a bit of ghee or oil and let it distribute. We add the dough (now at medium heat -5-), close it and let it be half a minute on the right side, then turn it around for a minute and a half and turn again, leaving some seconds before opening. It really works perfectly well now, and this recipe is the right to show it. It is soooo nice: Coconut milk waffles, a vietnamese treat. You can find the recipe here and be sure to give it a try! We all loved it.

This month Daring Baker challenge was a coffee cake. A really good coffee cake. It is basically a yeasted swirl bread filled with meringue which melts in the oven and penetrates in the dough giving it a nice moisture. Along with the meringue some other fillings are added, in our case nuts, cinnamon and chopped chocolate. The dough has two rises. As I usually do in this cases, I left it overnight in the fridge for the first rise and then took it out half an hour before of starting to shape it. The recipe makes two ring cakes. This is actually a lot so we froze one, cut in slices, so we can take them out and warm them directly in the toaster.

It is a very nice recipe. For sure a keeper 🙂

There are so many variations of this cake possible, that it will provide for sure an excuse for new attempts. The Daring Kitchen gave us the suggestion of a saffron-scented dough with a spicy filling or look for instance here for a savory bread with this recipe.

The Challenge of March for the Daring Cooks was some Peruvian Food: Cheviche de pescado and Papas rellenas. We decided to skip the cheviche, as we don’t trust so much the freshness of the fish around here, but even if late we were determined to try the Papas rellenas. They are basically made out of a “dough”, which is basically mashed potatoes with one egg, and in the middle you put a filling that you like. We filled them with minced beef, cooked with raisins and olives. Just as the recipe describes it, but without adding any extra egg. Finally they are then coated (just as done with the traditional Spanish croquetas) and fried.

They were very good. It is for sure a recipe that will be coming from time to time in our weekly menus.

We served them with a simple salad and some beetroot pesto on bread, which is delicious. For the pesto just put together in the food processor the cooked or roasted beetroot, with some garlic and almonds, a pinch of salt and grated Parmesan cheese. For the quantities just follow your taste. It has to have a rather fine texture, so you have to blend it for several minutes, adding from time to time olive oil. We previously roasted the beet roots individually folded in foil at 200C, for about 45 minutes to one hour. They are really aromatic this way and do not loose any juices. You can see detailed instructions here.

Magdalenas are the traditional Spanish muffins. They are normally eaten at breakfast and we like them a lot 🙂

We have been doing them from time to time using this recipe. But we decided to try the new recipe posted in the same fantastic blog, as it does not contain any cream. We have modified the recipe to make it a bit healthier: we exchange 2/3 of the flour with whole wheat flour (and a good spoon of potato starch), and all the sugar with muscovado sugar (and we also reduce the quantity a bit). They were incredibly good, even several days later. Maybe they did not grow as much as they should, but this is probably because of the whole wheat flour. 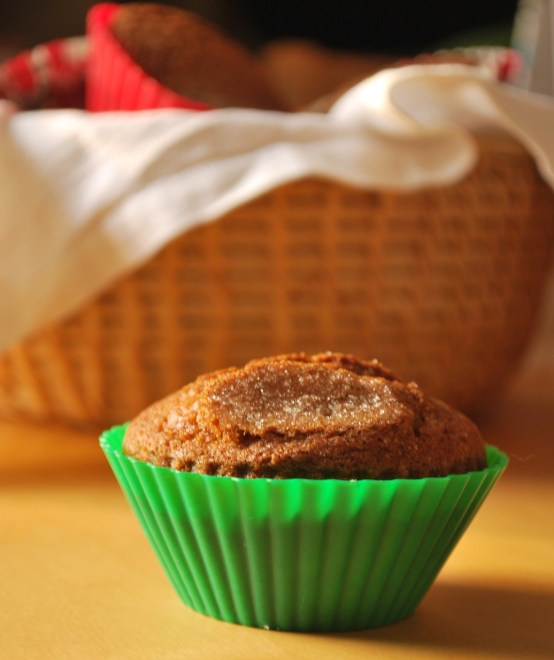 Look how spongy they were:

I had the wish of a special cake for my birthday and my husband made this superb cake, we had tried by some friends. It a shortcrust pastry filled with a pastry cream made with yogurt and orange juice. The recipe is supposedly coming from the Konditorei Opera in Regensburg which is famous for their cakes.

In February we were challenged in the Daring Kitchen to make panna cotta. It is a dessert we have tried several times, both with gelatin and agar-agar. This time I used powdered gelatin as called for in the recipe. I made it half-half (half cream, half milk) which is more than fine and still very creamy. I skip the sugar, as indeed it is sweetened enough with the honey. It is better to use a mild honey as acacia honey, but it is of course a matter of taste. You can previously infused the cream and milk mixture to obtain different flavors (with lavender, vanilla beans, tea, cinammon, etc). On top we made a blood orange juice jelly (just following the instructions of the gelatin package with the juice as the liquid component). It went very well together and its tartness helped balancing the sweetness of the panna cotta. 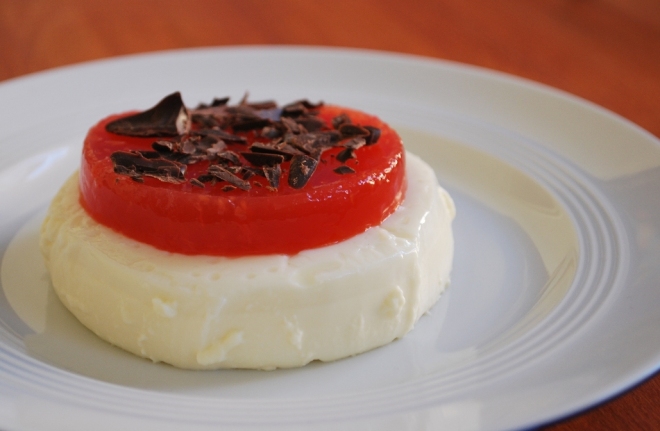 As you see, I decided to put a bit larger images now 🙂

As part of the challenge we also made Florentiner cookies. They were very good and indeed they were eaten quite fast. Thery also were quick and easy to make, but I am not sure of using this recipe again. For my taste they is too much butter in them. Otherwise no complains.

We also made later on a vegan version of the panna cotta, following this recipe. But as I had previously experienced with silken tofu, making chocolate pudding with no agar-agar I tried to skip it here. The result was nice but did not have the consistency of panna cotta, and could not be unmolded.

The Daring Cook Challenge in February brought us to learn some Japanese dishes. We really loved the Sobe Noodle Salad. Soba noodles are buckwheat noodles, and I had never eaten them before. But since this challenge we have already made them several times. The recipe is really flexible and you can add any veggies you feel like. We never used dashi as we thought we would not use it much afterwards, and just substituted it with regular vegetable broth. 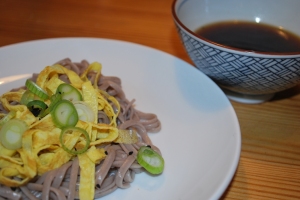 Another thing I liked a lot from this challenge was learning how to make these thin Asian omelette.

The second part of the challenge was to make tempura. This is a dish I have already tried several times and which I really like. The “dough” for the tempura is very easily done and there is no need for special flour mixes. But our homemade tempura came out to greasy, even if we had carefully measured the oil temperature. Maybe the dough was not cold enough as we did not have any ice at hand. The little one loved specially the sweet potatoes and of course the mushrooms.

Cheese bread or rather cake. I think the eggs are the culprits for not being able to see it as a bread. I made a whole loaf, a finished it in the next two days. It is quite good but rather heavy. Nice to accompany something lighter. For the cheese I used a combo of emmentaler and comté. 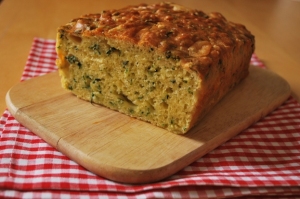 From the list of recipes for February by FFwD, I just came to do two of them:

Orange-almond tart: extremely good. The shortcrust pastry dough (Mürberteig/pasta frolla/pâte sablée/masa quebrada) is filled with an almond cream and topped with semi-dried orange segments. I freeze half of the dough to make a smaller tart. I was perfectly delicious. I would repeat it any time. The recipe can be found online here or of course in the book “Around my french table”. The dough can be easily exchanged by any similar recipe as for instance the one of Artusi. We just forgot to take any fotos 😦